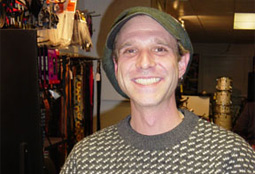 Monty began playing bass at 13 and has been at it ever since.  He received his formal training on acoustic and electric bass through the Humber College jazz program where he majored in performance.

After graduating Monty has kept himself busy playing numerous jazz and blues festivals throughout Canada and the US.  He played on Johannes Linstead's Billboard charting album Sol Luna Tierra, and toured with Big Rude Jake.  He has shared the stage with Jackie Richardson, Gene Wilder, Jim Cuddy, Alan Doyle, Sean McAnn, Alexis Barrow, Lee Oskar and Jeff Healy to name just a few.

Regarding teaching, here is what Monty has to say:

I'm trying to combine playing, reading and theory into a cohesive whole.  I've had people tell me they can't play.  I disagree.  Everyone has musical ability.

One of the many priviledges of teaching is to see how so many students have gone on to continued success, be that musical or otherwise.  You can't have a one size fits all approach.  You need to be flexible enough to change that approach to suit the individual while still getting the core elements across.  Everyone is different - that's what makes music beautiful.

Former students include Adam Zinatelli now with the Calgary Symphony and Adam Shoji of Seaway.