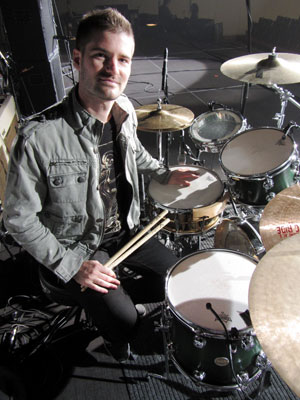 Jeremy’s enthusiasm, relentless work ethic, team player attitude and ability to quickly adapt to any situation make him one of the most sought after drummers in Canada. Being in such high demand has kept him busy playing for a multitude of artists from different musical genres and working in the studio with producers such as Gordon “Comissioner Gordon” Williams, Greig Nori, Adam Tune and Matthew Von Wagner.

In 2013 and 2014 he primarily toured with CCMA female vocalist of the year Kira Isabella, as well as playing shows and TV performances with Brett Kissel, Daniel Wesley, KO, Autumn Hill, Suzie McNeil, Maddy Rodriguez, Most Non Heinous and Rebel Emergency amongst many others. He was also the house drummer for the 2013 season finale of YTV’s reality show The Next Star, as well as drumming in a 2014 episode of the show and appearing on YTV's Summer Beach Bash episode feat host Nick Cannon.

Early on his career, Jeremy was the house drummer for three years at Canada's Wonderland for shows such as School Of Rock and Twisting To The Sixties.

Jeremy is a graduate of the Humber Music program, which he attended shortly after arriving in Toronto.

Jeremy has been teaching since 2004. He enjoys teaching all levels and is known as a very patient, passionate and enthusiastic teacher. He often plays guitar along with the students, giving the lessons a more relaxed and band orientated feel.